The Kelvin Home: Cleveland Heights Leads the Way to “A New and Better Way of Living

On Wednesday, September 8, 1937, George W. Mason, president of Nash-Kelvinator Corporation of Detroit, presided over the opening ceremonies of two “Kelvin Homes,” one at 3202 Rumson Road in Forest Hill and the other at 21361 Stratford Avenue in the Beach Cliff neighborhood of Rocky River. The Kelvin homes were the first homes built in Cleveland with central air conditioning. They also featured “the latest discoveries and achievements of housing science,” including an electric Kelvinator range, refrigerator, washing machine and ironer. According to an advertisement, they were “homes where all the drudgery is eliminated — where tasks are done electrically.”

The grand opening of the Kelvin homes was accompanied by much fanfare and was attended by city officials and civic leaders. The event was heralded by a flurry of articles and advertisements in the Cleveland Plain Dealer, Cleveland Press and Cleveland News. Various contractors and decorators trumpeted their involvement in the project. The Second Federal Savings and Loan Association got into the act by running an ad touting its mortgage services with the tagline “Comfort in your financing, too” with a drawing of the Forest Hill Kelvin home. The Rudolph Wurlitzer Company installed a new “Butterfly” piano in both homes and their playing was featured on the “Kelvin home radio show” on WGAR on Tuesdays, Thursdays and Saturdays. The dedication ceremonies were broadcast as well. After the ceremonies were completed, Mason spoke at a luncheon held at the Advertising Club. 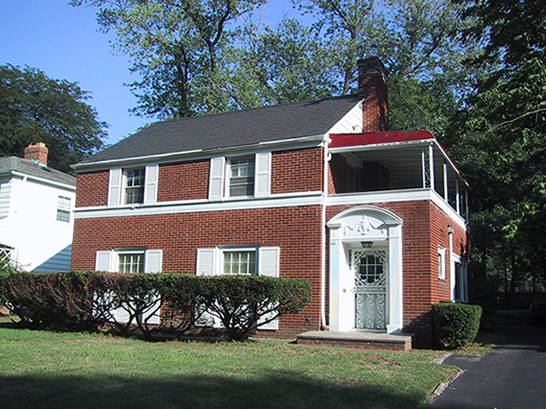 The Kelvin House at 3202 Rumson Road

The homes were designed by Detroit architect J. Ivan Dise and built by Oil Heating Devices, Inc., Kelvinator’s local distribution agent. In an interview in the Cleveland News, the president of Oil Heating Devices, W. R. Kromer, claimed that because of the high efficiency cooling unit, the cost of year-round comfort in the “specially-designed” Kelvin home would in many cases be less than only the cost of heating a comparable residence. Kromer predicted “universal acceptance of residential air conditioning in the near future.”

The Kelvin home in Forest Hill is in some sense a result of the failure of John D. Rockefeller, Jr.’s, original plan for the development. When Andrew J. Thomas’ French Norman homes on Brewster Road and adjacent streets failed to sell, Charles O. Heydt, Rockefeller’s trusted advisor and president of Abeyton Realty Corporation, and James C. Jones, manager of the Forest Hill allotment, explored innovations in home building to attract attention to the development. The results of their efforts include the five Arcy Corporation steel frame homes on Monticello Boulevard and one of the first air-conditioned homes in Cleveland being built on Rumson.

Despite all the hype, the Kelvin home did not sell immediately (perhaps due to its proximity to Dean Dairy on Mayfield at what is now U-Haul) and was rented out like many other Rockefeller homes. In an October 1938 letter to Frank S. Staley, who worked closely with Heydt on real estate matters for Rockefeller, Jones states that the architectural design of the “Kelvin house was only accepted after numerous allowances were made for the location.” It appears that Rockefeller did not care for the newer homes being built in the development and Jones was forced to defend the choices of his architect. In his response, Staley indicates that Rockefeller preferred the garage to be hidden behind the house instead of being a prominent element of the front elevation. Interestingly, he also notes that Rockefeller’s sons Nelson and Laurance, perhaps with more contemporary taste, did not agree with their father.